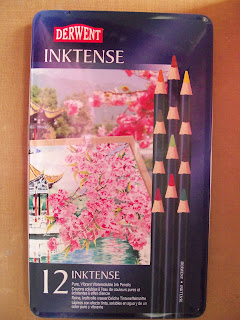 When I bought these Derwent Inktense colored pencils in 2009, I loved the way they looked on the paper. And the colors were awesome! Then ugly rumors starting appearing on the webber-net. Rumors about that four letter word that begins with "F". Yes, you know what I'm talking about : FADE. Artists were kicking these pencils to the curb. Giving them away. Throwing them away! All because they said those bright yummy colors faded. Egads! What was I to do?  I decided to not make that decision, took a deep breath, and put the pencils carefully away in a drawer. 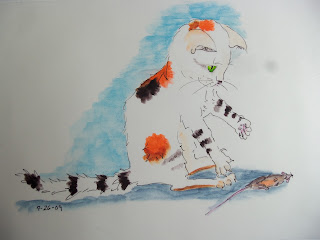 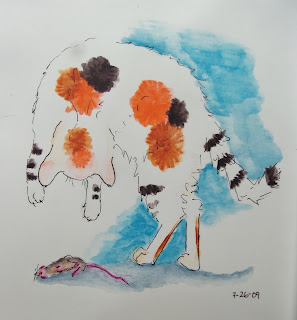 Recently, I came across these kitty sketches that were done in back in 2009 during my happy days with the Inktense pencils. I was curious to see if they had faded at all. So I carefully took the pencils out of the drawer, cut off the edge of the paper that the sketches were done on, and made some color swatches. 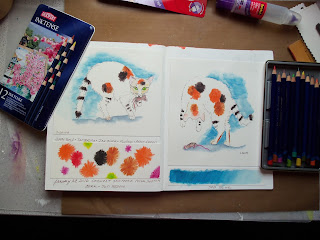 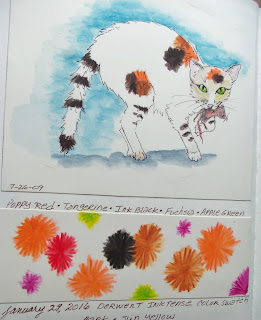 I wish I had used more color on the original cats, but as far as I can tell, the orange, brown, and black have not noticeably faded over the last 6 plus years. Should I put it all away for another 6 years and then retest? Or just ignore the "F*@#" rumors? What to you think?

Posted by Patty Ruthe at 7:38 PM No comments: 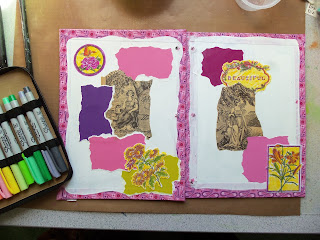 #permissiontoplay Working on a project for Carolyn Dube's class - making a cardboard journal in which you just have fun with the pages! This is one spread with collaged items: old almanac page, color chips form the hardware store, canvas stickers from the discount bin at ACMoore. 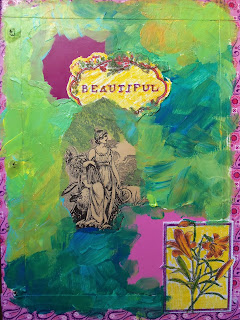 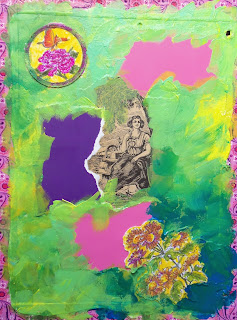 You can see that I have added lots of acrylic colors! But then I went a bit crazy... 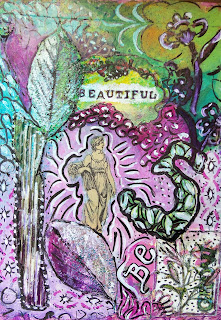 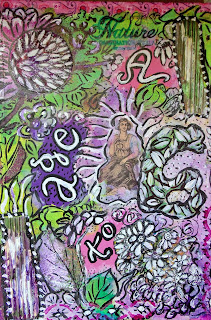 And since NO ONE YELLED STOP! The result is not my fault. The leaves are real. I'm in love with corrugated cardboard. More collage, pentel pocket brush, a bit of shiny paint, spray inks, stencils, and whatever. Somewhere in there it does say "A beautiful age to be - 65". I decided to let the pages of the journal reflect the season's events. I'll be 65 years wise in a few weeks!

Posted by Patty Ruthe at 2:00 PM No comments: 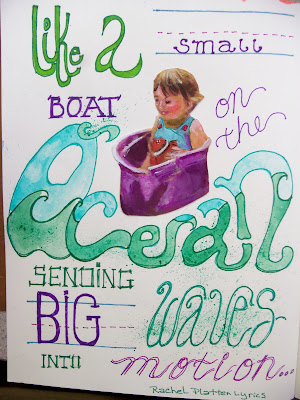 When my son was 2 he went to sea in an old washtub!

Posted by Patty Ruthe at 1:45 PM No comments: 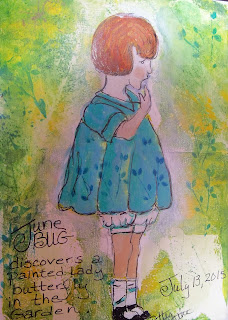 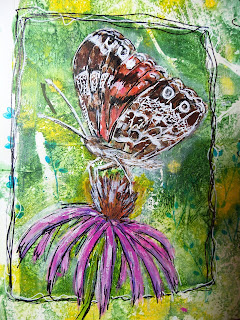 "June Bug"is a character from my journal that represents the child-like sense of wonder found in naturalists. I completed these pages last summer after finding a Painted Lady Butterfly in the backyard for the first time. I monoprinted with a Gelli plate, stamped, painted, and just had fun with art supplies.

Posted by Patty Ruthe at 8:19 PM No comments:

Something to Crow About! 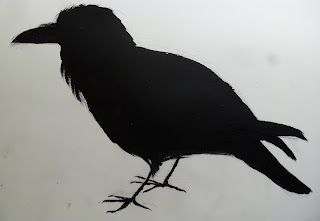 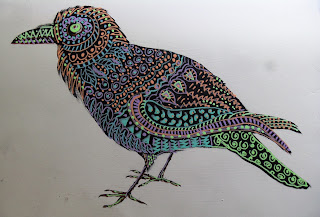 Raven Silhouette. Celebrate "Something to Crow About" in Lancaster, PA http://www.somethingtocrowabout.net/ And also at the North Science Museum http://www.northmuseum.org/event/family-friday-after-hours-something-to-crow-about/

Posted by Patty Ruthe at 7:20 PM No comments: 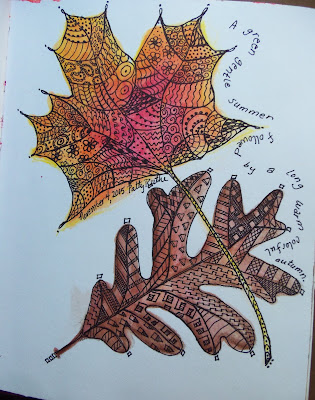 Trending now - adult coloring books. Do you know that you can use your nature journal to de-stress! It's easy! While on your nature walk, pick up a few leaves. Once you are back inside, trace the outline of each leaf on a page in your journal. Then use watercolors, crayons, whatever you have, to color them in.You don't need to add any details because now you are going to sit back, put your feet up, and using a fine line black Sharpie just doodle designs on the leaves. It is fun. It is mesmerizing. But, warning: it can be habit forming!

Posted by Patty Ruthe at 5:46 PM No comments: 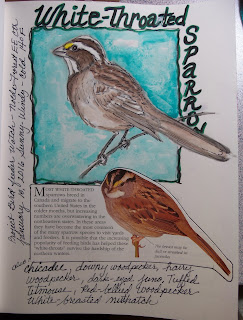 Project Bird Feeder Watch at Nolde Forest EE Center today Sunny, windy, a cold 14 degrees. Love this bird count because it takes place indoors! A white-throated sparrow stopped by. It was all fluffed up as protection against the cold. I see chipping sparrows in my yard but not the white-throats.

Posted by Patty Ruthe at 6:47 PM No comments: 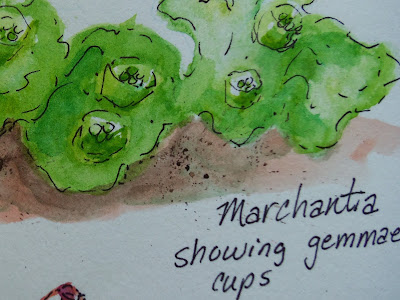 Ethnomarchantiology: the study of the human use of liverworts. If this was a book, it would probably be very thin! I heard (no source, just word of mouth) that the early PA Dutch used to line their bread box with Marchantia to block a witch's spell that would keep the dough from rising. The little cup-like structures are called gemmae cups. During a rainfall, they disperse small discs that form new plants. This is a form of asexual reproduction. (Sketch done from a live model during a moss and liverwort workshop.)

Posted by Patty Ruthe at 6:28 PM No comments: 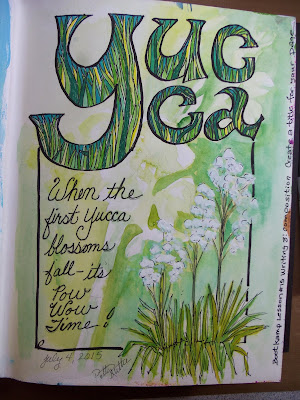 Every page in your journal does not have to look like it came from a published guide book! Feel free to experiment, express your feelings, or just have fun. I was trying to paint some yucca flowers last summer but the page was going nowhere. So I played with whimsical lettering and quickly drew the whole yucca plant down in the corner. The original painting then became the background.
Note: A floral calendar uses the blooming time of a plant to remind you of another event. In this case, as the yucca blossoms start to fall, our local Pow Wow is held.
Posted by Patty Ruthe at 2:38 PM 1 comment: 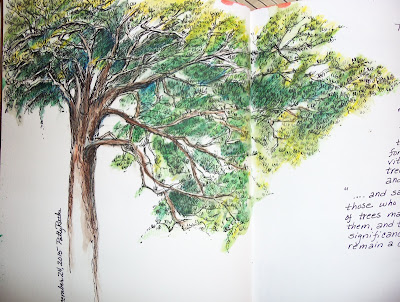 "The young student, not knowing how a tree is constructed, is unable to express its essential forms; he loses their vitality, and makes his tree look nondescript and lifeless" Rex Vicat Cole (The Artistic Anatomy of Trees: Their Structure and Treatment in Painting 1915)
Not sure what kind of tree this is. I was inspired by the cover of the above mentioned book.

(Watercolor crayons and ink in sketchbook) 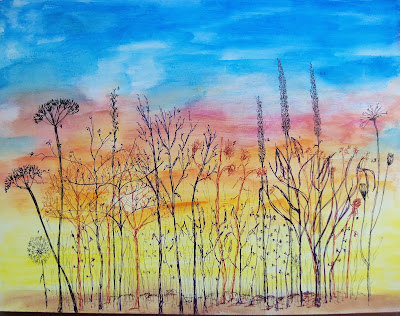 #2 Lessons from a Tree 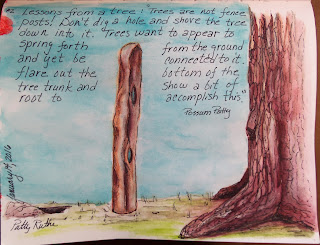 #2 Lessons from a tree: "Trees are not fence posts! Don't dig a hole and shove the tree down into it. Trees want o appear to spring forth from the ground and yet be connected to it. Flare out the bottom of the tree trunk and show a bit of root to accomplish this." Possum Patty
(Derwent Inktense, Graphitints, and Sharpie in sketchbook.)

Posted by Patty Ruthe at 3:16 PM No comments: 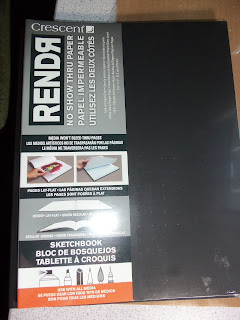 Trying out a new sketch book by Crescent called RENDR with a backwards R at the end.
It states "no bleed through" on the cover. 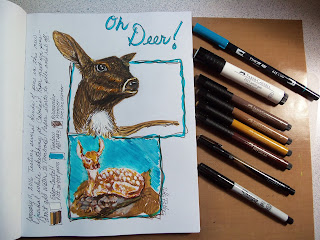 Some of the pens that I used: Tombow, Faber-Castell brush pens, Prismacolor Premier Fine Line, and Sharpie fine line. 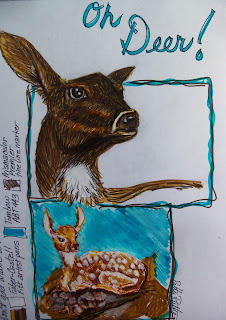 There was no bleed through to the other side of the page but when I added water with a brush to the Tombow (blue in the picture) the paper started to buckle and then disintegrate!

More experimenting to come! Someone suggested putting gesso on the page.

Posted by Patty Ruthe at 8:45 AM No comments:

#1 Lessons from a Tree 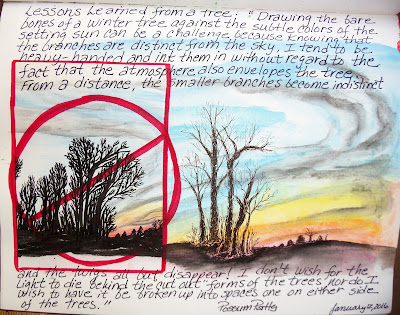 #1 Lessons from a tree. "Drawing the bare bones of a winter tree against the subtle colors of the setting sun can be a challenge because knowing that the branches are distinct from the sky, I tend to be heavy-handed and ink them in without regard to the fact that the atmosphere also envelops the tree. From a distance, the smaller branches become indistinct and the twigs all but disappear! I don't wish for the light to die behind the "cut-out" forms of the trees, nor do I wish to have it be broken up into spaces, one on either side of the trees." Possum Patty (insert outlined in red is a separate paper done last year, found, and glued onto the page; Staedtler Karat Aquarell and Micron pens)
Posted by Patty Ruthe at 4:27 PM No comments: